The current ringing_tower test isn’t too bad for input shaping calibration, but it has 1 severe defect: for each tested axis it, technically, changes the velocity for both axes, because it has diagonal moves that are pretty much impossible to avoid: 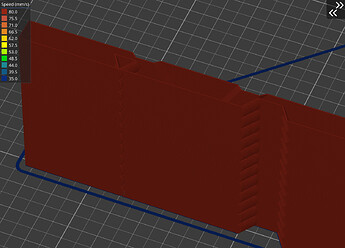 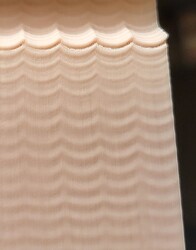 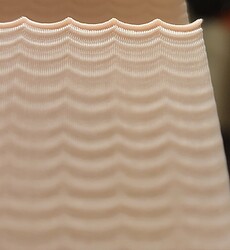 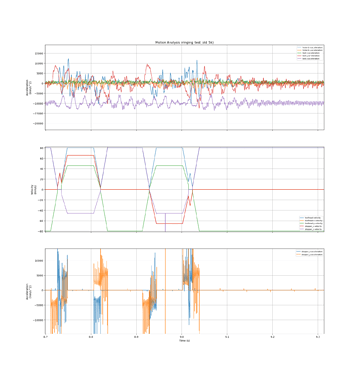 ringing_test_old_5k1920×1998 396 KB
one can see that even though this is the side of the test for X axis, Y axis actually resonates more and has higher amplitude of vibrations, and some vibrations are also present on Z axis.

In order to overcome this defect, I tried to create an alternative test that would affect one, the tested axis a time. Unfortunately, making such test required direct GCode generation. Here’s what I came up with: 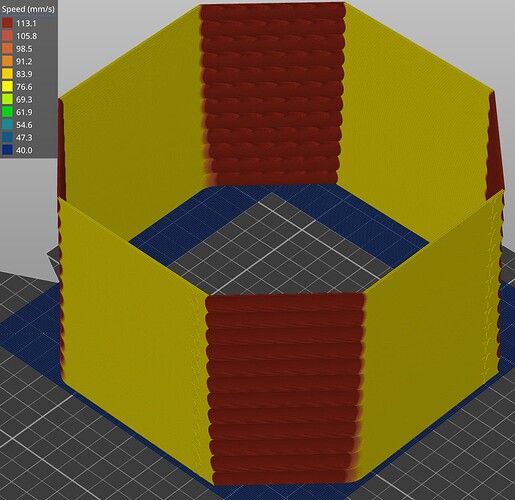 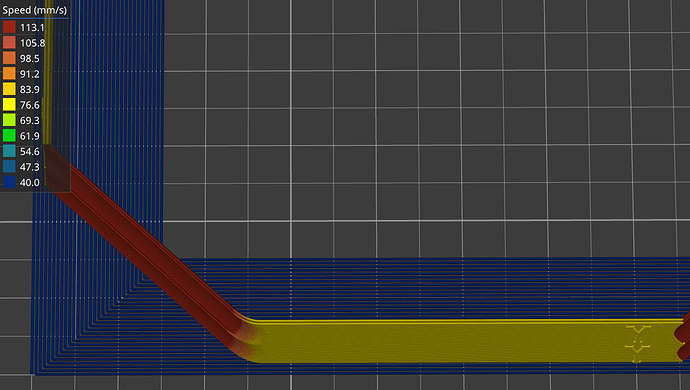 In a nutshell, the test first accelerates both axes during a diagonal move, but then decelerates only one - tested axis - to a complete stop, while the other axis maintains its original speed, and the vibrations are excited only on one axis at a time: 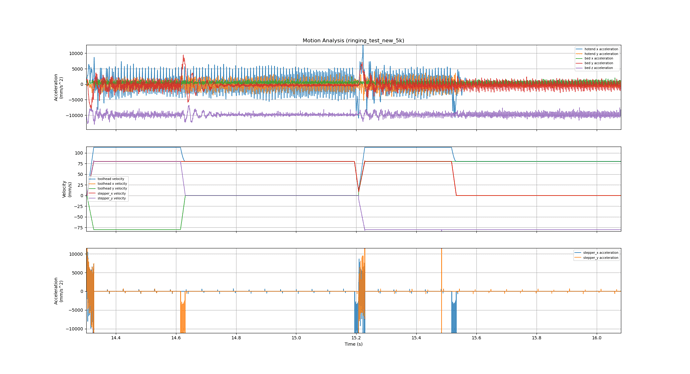 The test has the embossed axes letters on the sides where the measurements are supposed to be performed. They can also be used to estimate the magnitude of smoothing after the input shaper has been calibrated, as they become less crisp with the increase of acceleration:

With the new test, I managed to more reliably calibrate the input shaper by measuring the distances and the number of waves in several places of the test and taking the averages:

These results were not in 100% correspondence with the data from the accelerometer calibration: 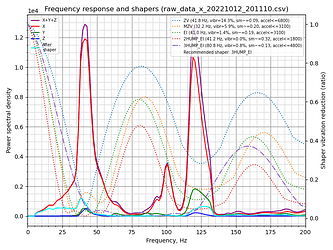 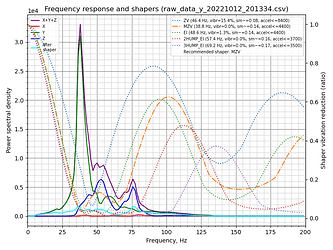 calibration_y800×600 115 KB
but this is likely because I have several resonances on each axis. And they were still quite good with EI input shaper.

At least, these were the results on my Ender 3 Pro, but it may work differently on, say, CoreXY or Delta printers. I also understand that the accelerometer-based calibration may be more robust. However, even then it is good to have an ability to confirm the results of the calibration. And some may not wish to purchase an accelerometer, and they may still benefit from the print-based test. So, if you want to give it a try, I made another module similar to a new proposed PA test available in the branch GitHub - dmbutyugin/klipper at pa-tuning-script (and also in this and this branch).

In order to enable it, I suggest to add the following snippet to the printer.cfg:

Then the ringing tower test can be triggered via a command like RUN_RINGING_TEST NOZZLE=0.4 TARGET_TEMP=210 BED_TEMP=55.

[ringing_tower] module has the following parameters that can be altered (and these are their default values):

And one small addition:

is the velocity one must use as V in a formula V * N / D when calculating the resonance frequency. N and D are the number of oscillations and the distance between them as usual: 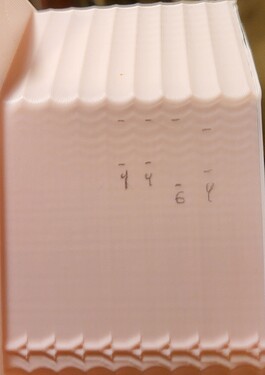 Very interesting. Seems a clever way to inject resonances into a test print.

As high-level feedback, I’m leery of adding a “mini slicer” to the master Klipper branch. My fear is that it could become a long-term support/development burden, as well as a configuration burden for users.

I understand the value in directly generating a print from within Klipper - it enables precise generation of extrusion moves. It also removes potential variance that different external slicers may introduce.

A user has to be able to configure and use an external slicer to effectively use a 3d-printer today. (I could talk for hours on how needlessly over-complicated I think modern slicers are, but ultimately the reality is that users need to be able to learn and use one.) I fear adding a “mini-slicer” to Klipper will increase the configuration burden for users, as I fear they will ultimately need to learn and configure both a “real slicer” and the “mini slicer”.

So, I think the test is interesting and I look forward to seeing test results. From a “high-level project direction”, I think this approach has some notable risks.

Maybe for the more experienced users you could add that and instruct to use start_print and end_print macros.
So one can further optimize the printer.

TBH, in case of other test generators I have also seen countless, often contradicting requests to add different features/options (e.g. heat up bed and hotend simultaneously to speed up the startup sequence, heat up bed and hotend sequentially to avoid problems on low-spec PSUs, add bed meshing calls, add [firmware dependent] pressure advance configuration, etc.). So, @koconnor, if you are worried about this type of challenges, I fully agree with you. However, notably this ringing tower test generator (and the other PA test generator) is actually very minimal: it generates only the GCode commands essential for printing the tower (and, well, its brim). I expect the rest of the code to be added by the users to their start_ringing_test / start_ringing_test gcode sequences up to their liking. They can configure the appropriate heating, homing and bed meshing sequences there and whatever else they need (e.g. enabling fan, additional purge lines, pressure advance setup, adjusting the flow rate, etc.)

And so I’m looking forward to the feedback from various users. If we find that this covers like 99% of the needs of different users, I think that’s good enough and we can keep it that way. If not - well, I do not know. It is not difficult to generate a 3D shape as per test and export it to an STL file with sufficient precision. However, modern slicers lack the tools needed to generate the required velocity profile when printing the perimeters of the model. So, unfortunately, it is a dead end. That said, Prusa Slicer and SuperSlicer have some built-in calibration generators, so it might be a last-resort option. Although, that would force users into using a specific slicer, and I am also not very familiar with that calibration generators and what is actually adjustable vs what isn’t, so it might still not work.

Kevin, it doesn’t need to be mainline.
Start a second repository with user-contributed scripts/tools, and with links to other related tools for the bigger one which are better picked each time from their original repository.

As high-level feedback, I’m leery of adding a “mini slicer” to the master Klipper branch. My fear is that it could become a long-term support/development burden, as well as a configuration burden for users.

I think exactly such features are the “unique selling point” of Klipper. Let’s take the CAN implementation as example:

I dare not judging any code complexity / maintenance burden things but for the user complexity, I think Klipper should be more freely accepting this in favor of new features or flexibility.
I also honestly do not think that Klipper does any worse compared to the other big firmwares (Marlin, RRF) and I used all 3 of them.

Overall I think that Klipper would profit from being more open to contributions, even if they would mean additional complexity.

As for the gcode generator proposed here, I think it would be a useful addition, especially on the PA side.
Currently I’m using @dmbutyugin proposed PA test tower and found it very useful. Easy to setup, quick to print and more easy to interpret than the traditional one.

Thanks for the feedback. I agree there is a difficult balance between managing features and managing long term maintenance. I wish I knew of a better way to convey and manage that balance.

To be clear, I have not made a judgement call on the proposal in this thread. My comments earlier were intended to relay high-level thoughts on where I felt this feature lies on a hypothetical “complexity vs benefits curve”. I do feel this proposal would add notable long-term developer and user facing complexity, which should be taken into consideration.

Start a second repository with user-contributed scripts/tools, and with links to other related tools for the bigger one which are better picked each time from their original repository.

I’m afraid it might be not that simple. This code, in particular, requires some changes in the virtual sdcard code, such that the user can pause and cancel the test mid-print. In general, there’s always a risk of two repositories divergence and that the one with the user-provided content will break and stop working. Having repositories for macros is one thing, but having a code that uses Klipper internal API in a separate repository may be fragile.

And separately, there’s another question, if there is a much better alternative, why suggest a subpar option in the main Klipper documentation instead? I personally think that Klipper should promote good 3D printing practices (well, at least, not promote worse practices). Now the question is, do either of the new tests (for input shaping and PA) provide enough user value and benefits to replace the currently suggested ones or not? I think only the user feedback can tell. However, it should probably not be in the form ‘X is better than Y in my opinion’, because we all have different opinions, but more like, X gives a result A, and Y gives a result B, and B is objectively better (i.e. prints look better or have fewer defects). So, if you find value in either of the newly proposed tests, I’d encourage you to share your results.