We need a design for a load cell that we can fit into a typical 3D printer toolhead to use as a probe. (This other thread is mainly about the software required for probing.)

There is prior art for this idea:

This thread is to provide a place to discuss and develop this idea further. Ideally we would end up with an open source design that some interested party can manufacture and that open source printer designers (Voron, Rat Rig etc.) can integrate into their tool heads.

Btw: for the Renkforce RF1000 3D printer, there is a 3D model available which includes the load cell construction. It can be downloaded from the German-language forum rf1000.de, here is the direct link (download button only appears after registration+login):

You can also find a FreeCAD version of the model with my personal modifications here (no login required): 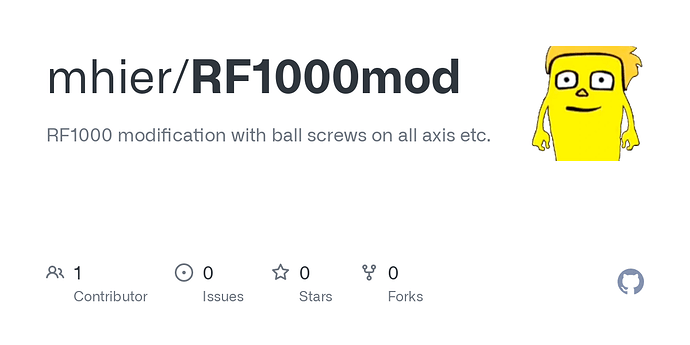 I can imagine, the design can be miniaturised a bit by using smaller load cells. In the original it will probably not fit for most printers…

It should also be mentioned that I see two fundamental distinct possibilities to use load cells in the toolhead. Either the load cells can measure any force applied to the hotend, including the force applied by the extruder motor, or they cannot “see” the force from the extruder motor. This has the following consequences (both positive and negative):

The RF1000 design can measure the extrusion force and is stiff enough so that it usually does not create problems, but we have seen such effects already if the required extrusion force gets too big (bad hotend, sticky material, high printing speeds - usually a combination of at least 2 of these). As a conclusion I would recommend to make the design either at least as stiff as done at the RF1000 (with 2 load cells rated for 5kg, TAL220B type) or such that the extrusion force is not seen by the load cells. That can be achieved by either putting the motor also onto the load cells for direct drive printers. For Bowden printers the force won’t be applied to the load cells without artificially separating the sleeve from the hotend somehow.

Personally, I don’t see measuring the extrusion force as a killer feature, but others in the RF1000 community will disagree with this statement

I am even thinking of changing the construction of my printer such that the motor sits also on the load cells, just to allow easier disassembly/reassembly of the entire toolhead. I am currently not using any feature which makes use of the extrusion force measurement (but I am frequently removing the toolhead, since the printer doubles as a small CNC mill).

No @Sineos, I hadn’t seen that!

Certainly there are experiments going on now looking at the extrusion force with load cells, e.g. V6 Size with Volcano Performance?! - YouTube

One of the nice things we can see from this is what range of force values we need to support. On the high end it seems that 5KG would be the most that an extrusion system could want, with most typically operating under 1KG at sane temps and flow rates. On the low end the Prusa XL was stopping a probe at 50g.

I’m in the camp that primarily wants probing and the other applications are less interesting. The first layer is the hard part of FDM 3D printing. If we can make a significant dent in that issue I’d be very happy. So if I had to pick some things I want I would say:

I’m very intrigued by the PCB designs with SMD resistors. Given how cheap & easy they would be to manufacture I think we have to prove they wont work before going on to more complex solutions.

And none of that is to say that other ideas and designs are not welcome! Lets try everything that people are passionate about all at once!

50g extrusion force is close nothing. With a E3Dv6 hotend, I typically end up with extrusion forces around 1kg at normal printing speeds and easy materials. If one starts tuning for higher speeds or starts to use other materials (e.g. PETG has a tendency to stick to all-metal heat breaks), extrusion forces of say 2-3 kg are pretty normal. Hence I would say 5kg is a reasonable maximum design load for an average printer, since you need some headroom between a typical scenario and the maximum acceptable situation. My printer has a pair of 5kg load cells, so the maximum acceptable force is even higher (but not twice as high, as the forces are not evenly distributed).

I would recommend considering available off-the-shelf load cells before getting into the business of designing your own. You can buy a variety of differently shaped load cells for not so much money, you just have to think about how to get them where you need them. Maybe for first tests and gaining experiences I would recommend even to live with a potential reduction of the maximum print size (if the load cells are too big and will hit some other components at the edges of the axes). This will help you understand what to expect and what to optimise your custom design for.

If you are not planning on measuring the extrusion forces, things will also be more relaxed.