Many people (myself included in my early 3D printing days) implicitly expect off-the-shelf near “perfection” of the heater performance of their printer. It takes time and practice to learn and appreciate that PID controller tuning is a largely empirical process without a one size fits all solution. Different printer firmware uses different implementations of the PID controllers and different methodologies to derive (approximate) the process PID constants. When this is combined with a practically infinite number of printer designs and configurations, corner cases exist where the predefined solutions can struggle or falter. The purpose of this post is to document a reasonably simple to follow approach that will allow people to experiment with manual tuning of the Klipper PID controller in those corner cases.

The following summary outlines the steps that I took to manually derive the PID constants for my heavily modified CR-10S Pro heated bed. 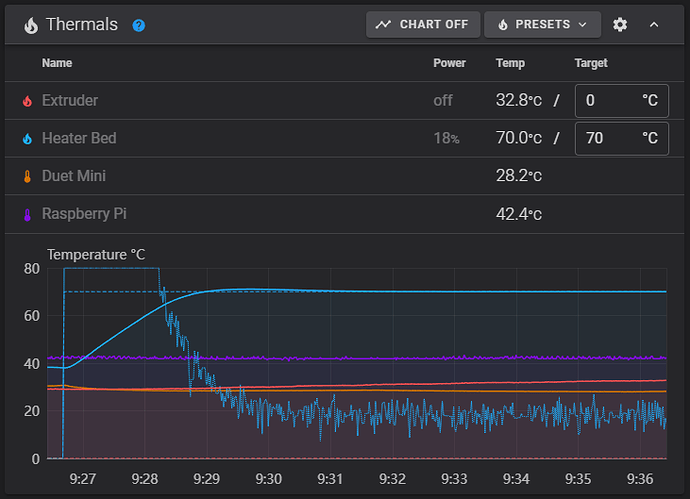 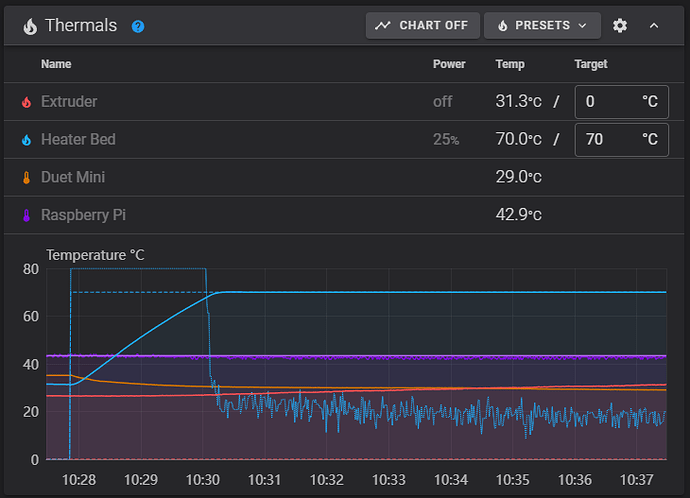 It is worth noting that the manually tuned PID constants result in substantially tighter control, as evidenced by virtually no temperature overshoot (0.1 deg.C in practice) and very aggressive power control. As shown above I obtained those using SAFETY FACTOR of 1. In some cases such aggressive loop could become unstable resulting in temperature and power oscillations. In those cases a higher safety factor value would be appropriate, for example 1.5. Feel free to experiment with your specific setup - the beauty here is that once you establish the thermal model of your setup, you can derive the PID constants using any technique of your preference and with your chosen safety factor (or effectively stability margin).

I have not spent much time experimenting with the hot end PID constants because in my case the Klipper auto-tuned values work very well. In principle, identical approach can be used for the hot end but it will require some more creativity in editing printer.cfg because Klipper will not function without a defined & functional [extruder] block.

2022-04-07: Revised content of steps 7 to 10 in order to fix my incorrect interpretation of PID_PARAM_BASE. The overall method and final results are not affected by this revision.

2022-04-11: I seem to have experienced a “senior moment” when compiling step 6. Despite copying the content of my own notes from several months ago, I am unable to reproduce the presence of Received 746305.064772: {"id": 1750268944, "method": "gcode/script", "params": {"script": "SET_FAN_SPEED FAN=bed_power SPEED=0.25"}} in the logs. Furthermore, I am not sure how my original logs included these stamps since they originate from webhooks.py I therefore revised steps 3 to 6 with a workaround that inserts time stamps in the logs using the SET_IDLE_TIMEOUT command.

Hi ReXT3D. I’m trying to follow your guide but when I look at my klippy.log there is a large amount of time stats missing. It seems to only record 60s after the timeout command is issued. Is there some setting I need to change to get the klippy.log to record everything?

Below is my klippy.log and the I used.

Hi and welcome to the community.

The best thing to do to prevent the logging from pausing would be to home the printer just before you issue the timeout command in order to enable the steppers. Another alternative would be to enable the hot end heater at some low temperature (like 50C). Either of these will force Klipper to continue logging every second.

I should perhaps add this to the original procedure…