Edited to make it more explicit that what I’m trying to is to get get KlipperScreen working with the Miuzei display and provide some more information.

Can anybody point me to what’s missing with setting up an MPI4008 (like: Miuzei Raspberry Pi 4 Touchscreen with Case Fan, 4 inch IPS Touch Screen LCD Display, 800x480 HDMI Monitor for RPI 4b 8gb/4gb/2gb with Touch Pen) on an rPi 4 with Mainsail? I can get it working quite easily under the Raspberry Pi OS but I can’t get it working under Mainsail.

Looking at the instructions, that should be it but I’m still had a flashing screen saying that it wasn’t installed.

I then found 4inch HDMI Display-C which is for the four inch Miuzei 800x480 display but no joy.

I guess I’m looking in the wrong places - could anybody give me a pointer? 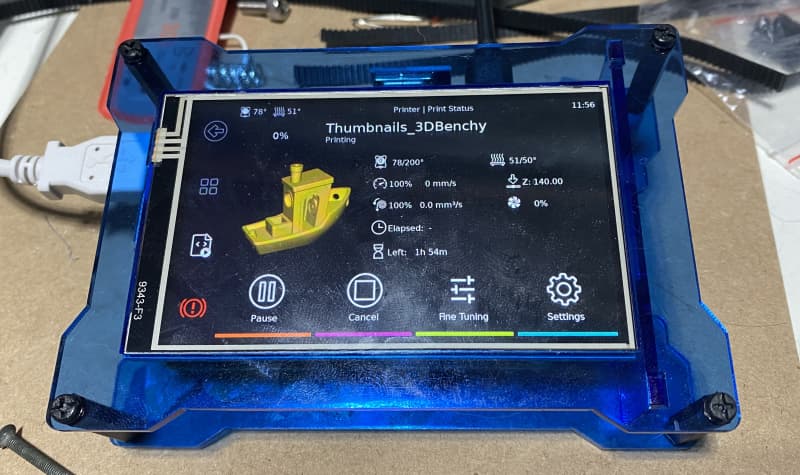 The process is fairly simple, but it has to be followed exactly:

The LCD-show commands from point 2. to use are:

Note for the last command (“sudo ./MPI4008-show”), it’s given as “sudo ./XXX-show 90” in the webpage instructions. I have inserted the display type and, as I like the natural orientation of the display away from the power cord, I haven’t specified an angle.

Sorry for the pedantic instructions but I found a number of ways to not quite get there - I had a number of cases where I could get the display working, but KlipperScreen wouldn’t work or I would have everything working and try to streamline it by doing the “update everything” earlier in the process and the screen would stop working.

Now, having spent about ten hours on this as well as working with them (I have two) for about six hours, I have to say that I wouldn’t recommend this display. It’s not particularly bright, even at its highest setting, and the resistive touch panel isn’t very responsive - you get a plastic stylus with the displays and they are necessary to use the alpha-numeric keypads for changing your WiFi connection or device name.

I’m going to copy this into the Hardware known to work with KlipperScreen thread.